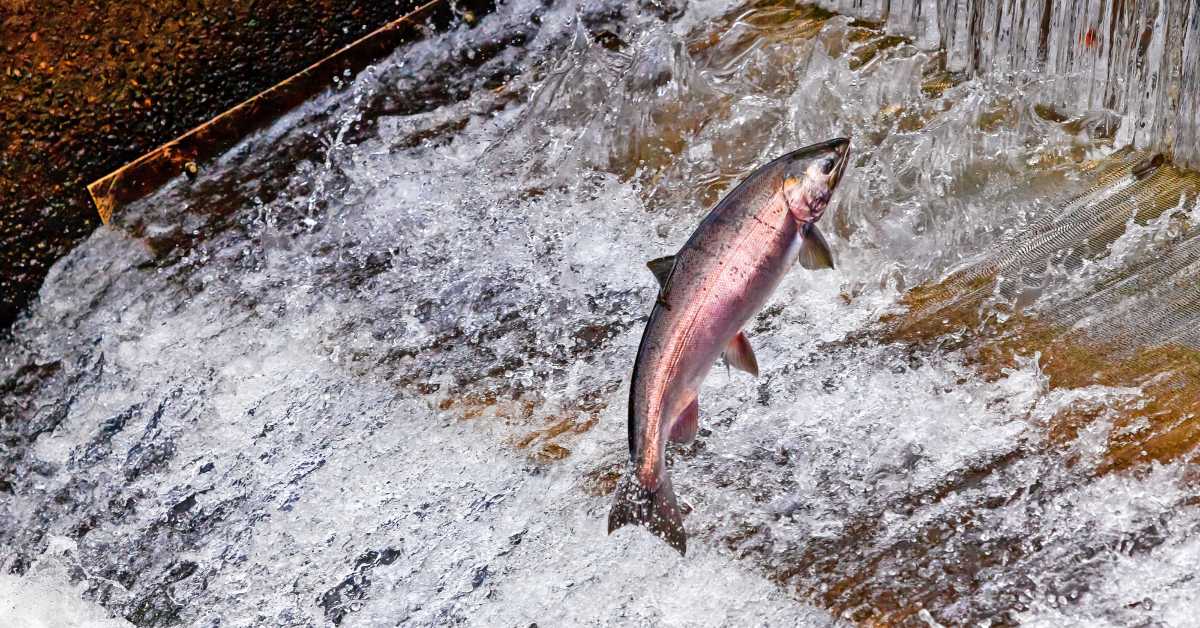 Salmon is one of the most popular fish in Alaska. There are all kinds of salmon, and each has its personality.

Some salmon are lazy and stay near the bottom of the river, while others love to swim upstream. In this blog post, we’ll look at the different types of salmon in Alaska. So, please put on your waders and let’s get started!

Chum salmon are one of the most common salmon in Alaska. Also known as dog salmon or calico salmon, dog or chum salmon are easily identified by their bright silver color and spots on their backs and tails.

Chum salmon are relatively small, averaging between four and eight pounds. However, they are an important food source for both humans and animals. In addition to being caught and sold commercially, chum salmon are also popular among recreational fishermen.

Chum salmon prefer to spawn in rivers with gravel beds, but they can also be found in lakes and estuaries. Spawning usually takes place between late May and early July. After spawning, chum salmon die, making them an important part of the food chain.

The flesh of chum salmon is high in omega-3 fatty acids and is considered some of the best-tasting salmon available. For this reason, chum salmon are often used in sushi and sashimi. They can also be grilled, baked, smoked, or canned.

They can grow up to three feet long and weigh up to 15 pounds. Sockeye salmon are found in lakes and rivers all across Alaska. The most popular methods for catching sockeye salmon are trolling and jigging.

Sockeye salmon are prized for their delicious taste and high levels of Omega-3 fatty acids, making them an excellent choice for commercial and recreational fishermen.

Coho salmon are fish found in the waters off the coast of Alaska. Also known as silver salmon, these fish are prized for the quality of their flesh. Coho salmon are typically smaller than other salmon types and have a darker coloration.

The school is near the rivers where they spawn. When the water temperatures cool in the fall, the cohos return to freshwater to mate. After spawning, the fish die.

The eggs hatch in late winter or early spring, and the young fish spend the next few years in freshwater before migrating to the ocean. Coho salmon are an important food source for humans and animals and are also popular sportfish.

Also read: How Does Salmon Get Its Color?

Chinook salmon are the largest type and can weigh up to 30 pounds. They are also the most popular type of salmon due to their rich flavor and high levels of omega-3 fatty acids. Pacific salmon are found in all five major types of Alaskan Salmon habitats: estuaries, river deltas, streams, lakes, and the ocean.

Most Chinook salmon in Alaska are caught in the ocean, where they spend most of their lives. However, they typically return to freshwater rivers and streams to spawn. Spawning usually occurs between May and July, and Chinook salmon generally live for four to seven years.

While Chinook salmon are not considered endangered, their population has declined recently due to overfishing and habitat loss. As a result, strict quotas have been placed on commercial fishing operations in Alaska.

Sport fishing for Chinook salmon is also regulated, and anglers are typically limited to catching two fish per day. Despite these challenges, Chinook salmon remain an important part of Alaska’s economy and way of life.

Pink salmon is the most common among the various salmon found in Alaska. Also known as “humpies,” pink salmon are so named for the distinctive hump that appears on the back of males during the spawning season.

Pink salmon are relatively small, averaging just two to four pounds at maturity. They are also relatively short-lived, with a typical lifespan of three to four years. However, what pink salmon lack in size and longevity, they more than make up for in numbers.

A single female pink salmon can lay up to 2 million eggs in a single season, and runs of pink salmon can number in the millions. For all these reasons, pink salmon plays an important role in the ecology of Alaska’s waters.

Types Of Salmon In Alaska – FAQs

What Are The Seven Species Of Salmon?

There are seven salmon species: pink or humpy salmon, sockeye, chum, coho, chinook, Atlantic salmon, and masu. These fish are anadromous, migrating from saltwater to freshwater to spawn.

Salmon are an important food source for many animals, including bears, eagles, and humans. They are also keystone species in their ecosystems, which means that their presence or absence can greatly impact the health of their habitat.

Salmon populations have declined in recent years due to overfishing and habitat loss, but efforts are underway to protect these fish and restore their numbers.

What Is The Most Popular Type Of Salmon?

The most popular type of salmon is sockeye salmon. Sockeye salmon are high in Omega-3 fatty acids, which are beneficial for heart health. They are also a good source of protein and contain vitamins and minerals such as Vitamin B12, phosphorus, and selenium.

Sockeye salmon are typically sold fresh, frozen, or smoked. They can be cooked using various methods, including grilling, baking, and sautéing.

What Is The Best Salmon In Alaska?

There is no definitive answer to this question, as different people have different preferences. However, some of the most popular types of salmon in Alaska include chinook, humpy salmon, coho, and sockeye salmon.

Several different types of salmon in Alaska can be found. These include king salmon, silver salmon, pink salmon, and chum salmon. Each type has its unique flavor and texture. The best way to experience all that Alaska’s salmon offers is to try them all!

Salmon is a delicious, healthy protein that can be enjoyed in many different ways. In this post, we’ve explored the different types of salmon found in Alaska, from king to sockeye salmon. We hope you’ve learned something new and are inspired to try some fresh Alaskan salmon for yourself.